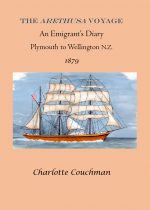 Shipping cost is added at the checkout and is for 2nd class postage and packing costs.

This booklet is the account of Charlotte Couchman's actual diary she kept in 1879.

The following is a reader's response after reading the diary which gives a flavour of the stories that lie within these pages::

"A very interesting and moving diary. What a journey emigration to New Zealand and Australia was in those days, however much you were favoured and however much you'd paid, as Charlotte herself remarks of those aboard who had paid the full sum.  People today who think of travel endurance to the Antipodes as 28 hours on a plane, with interim breaks, have no idea what endurance really meant.  'Another Sabbath on the sea, and I begin to feel quite weary of the Journey.'  This account is particularly interesting as that of a woman who didn't really want to emigrate, but went for her family's sake, yet a family - at least, Charlie and his wife - who seem to have paid her little regard or taken her for granted, leaving her sustained only by the duty she felt towards her grandchildren, a duty she carried out in spite of her aversion to 'nursing and all that dragging about' when her daughter-in-law was ill.

Did you notice how odd are certain things Charlotte doesn't think to mention till well into the voyage, like the number of Catholics aboard, the number of Scotch, Irish and so on, not the sort you'd choose to mix with, I think she writes, but we (Christians) must all get on.  Strange going-on too.  The Dead Horse, with the sailors riding it round the deck, then hoisting it up to the yard arm and setting it on fire.  Charlotte seems curiously unperturbed by this boisterous, not to say dangerous, stunt.  Or was the dead horse no such thing, but some customary antic with a dummy that simply bore the name?  When the young woman with consumption dies and is presumably 'thrown overboard', as Charlotte writes of the fate of the dead twin babies, she

concludes her account of the piteous effect on the girl's mother and brothers with the sentence 'We were surrounded by sharks yesterday all day'; did her observation signify what it would to us, or was it just a co-incidental observation?  When the Arethusa is shadowed by the albatross -  'they are splendid birds'  -   and the sailors start catching them, skinning them and discarding their bodies, it was perhaps a relief that Charlotte knew nothing of The Rime of the Ancient Mariner.
Facebook Instagram Twitter