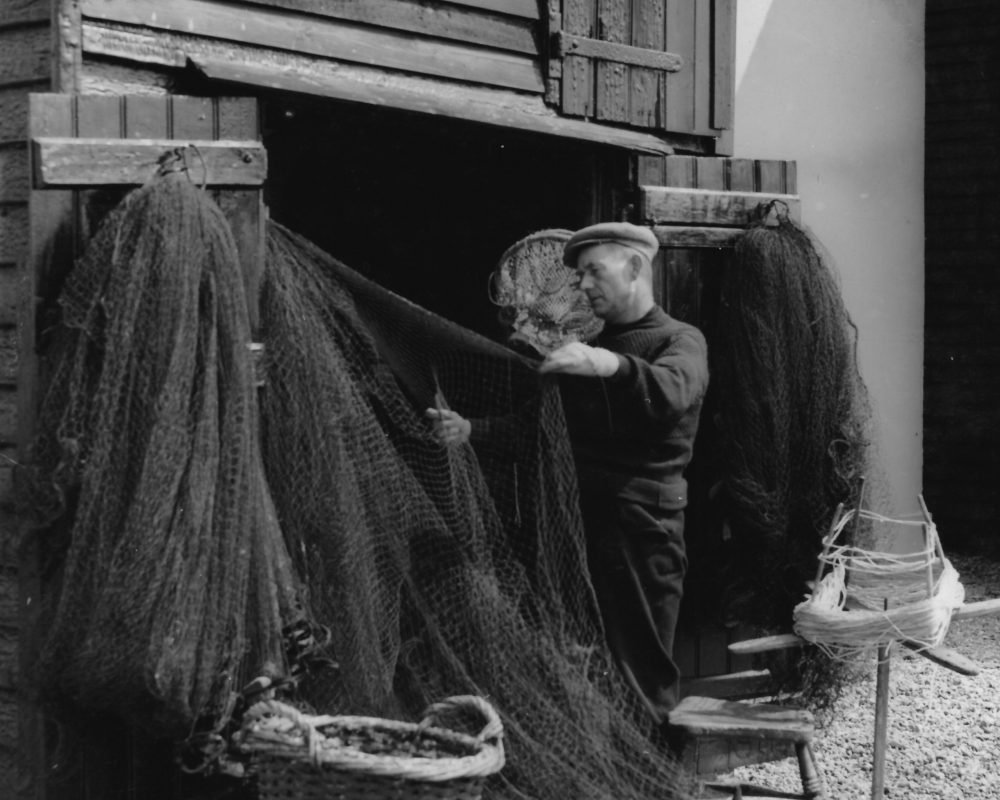 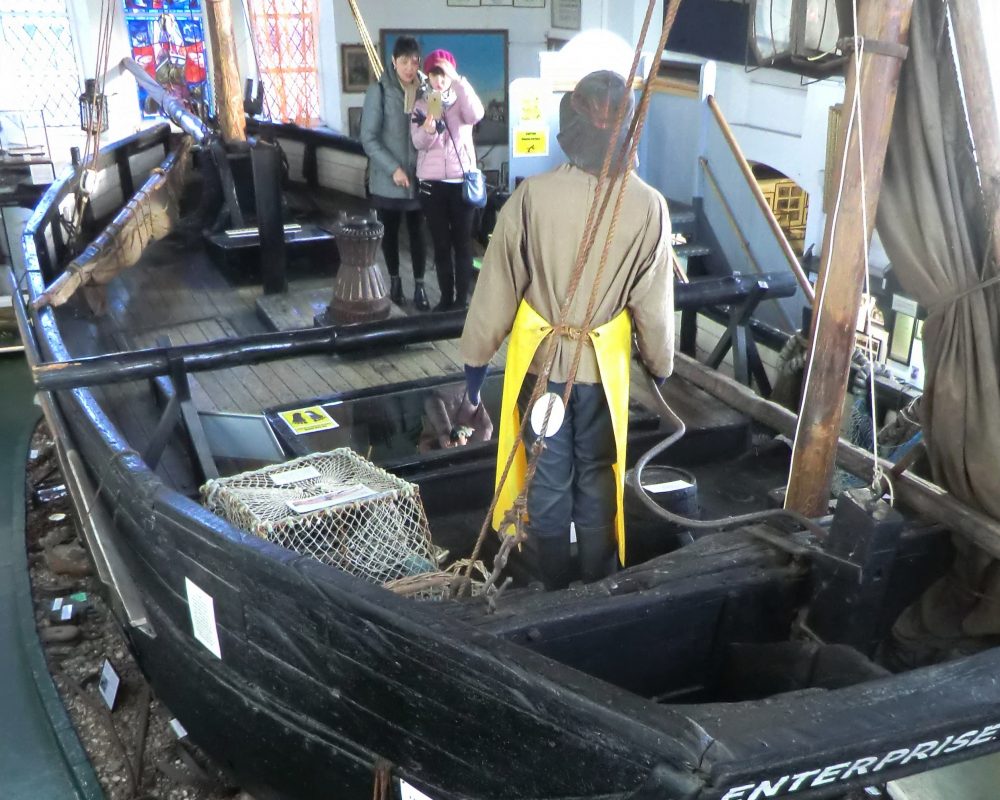 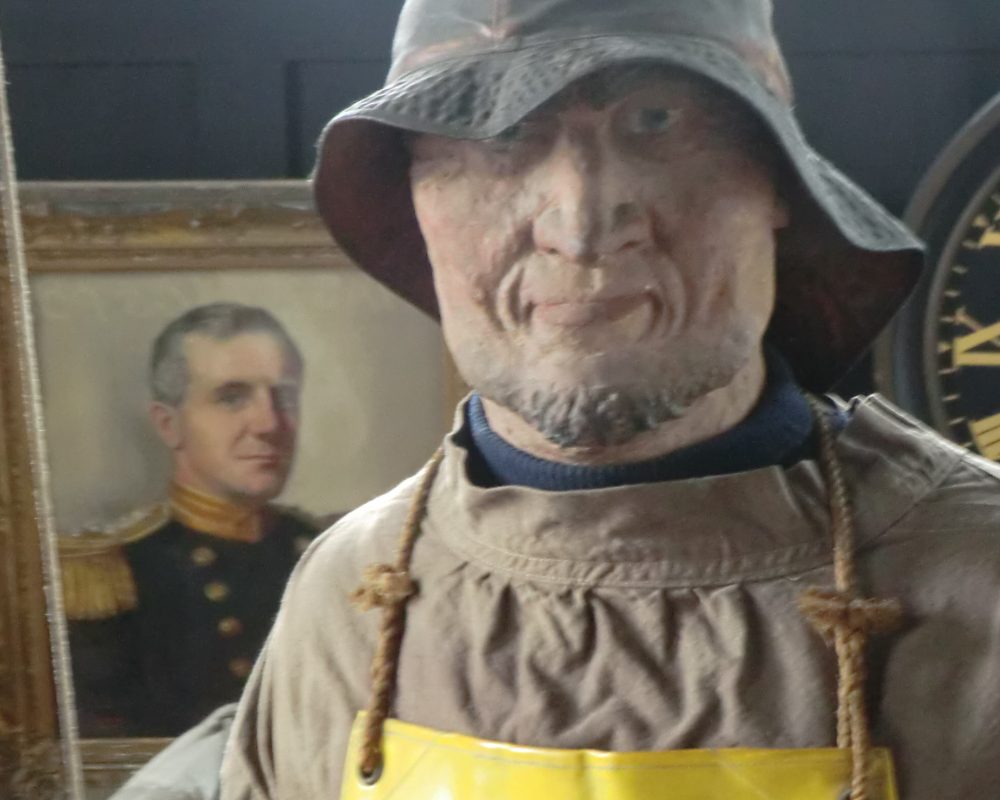 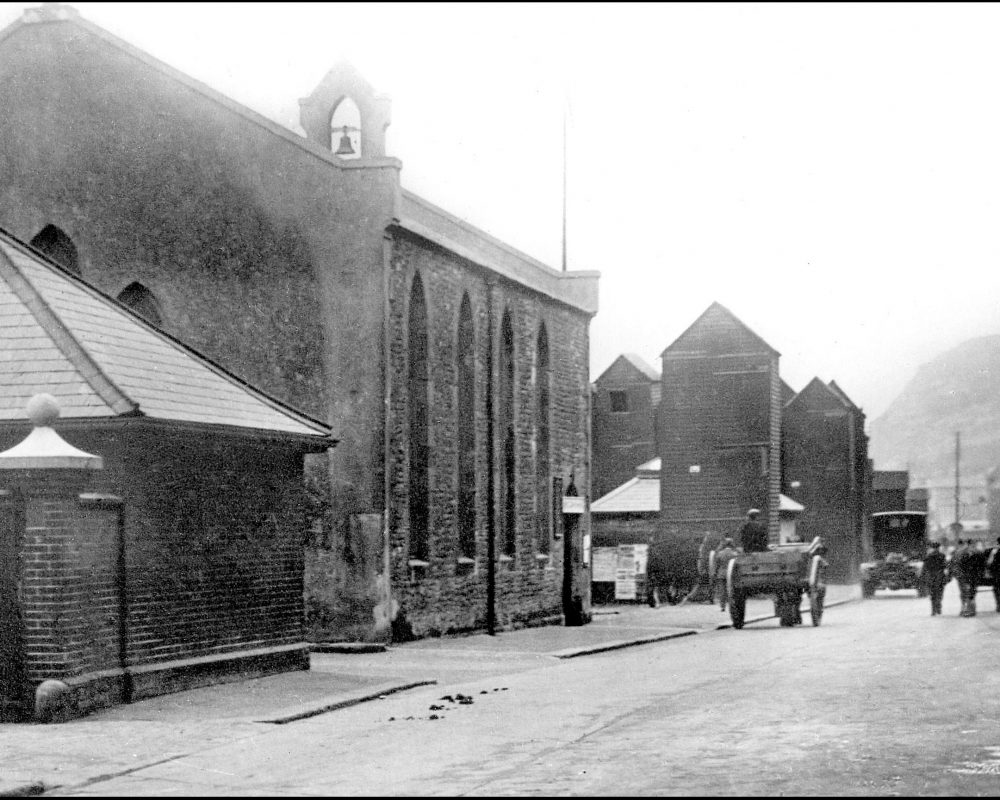 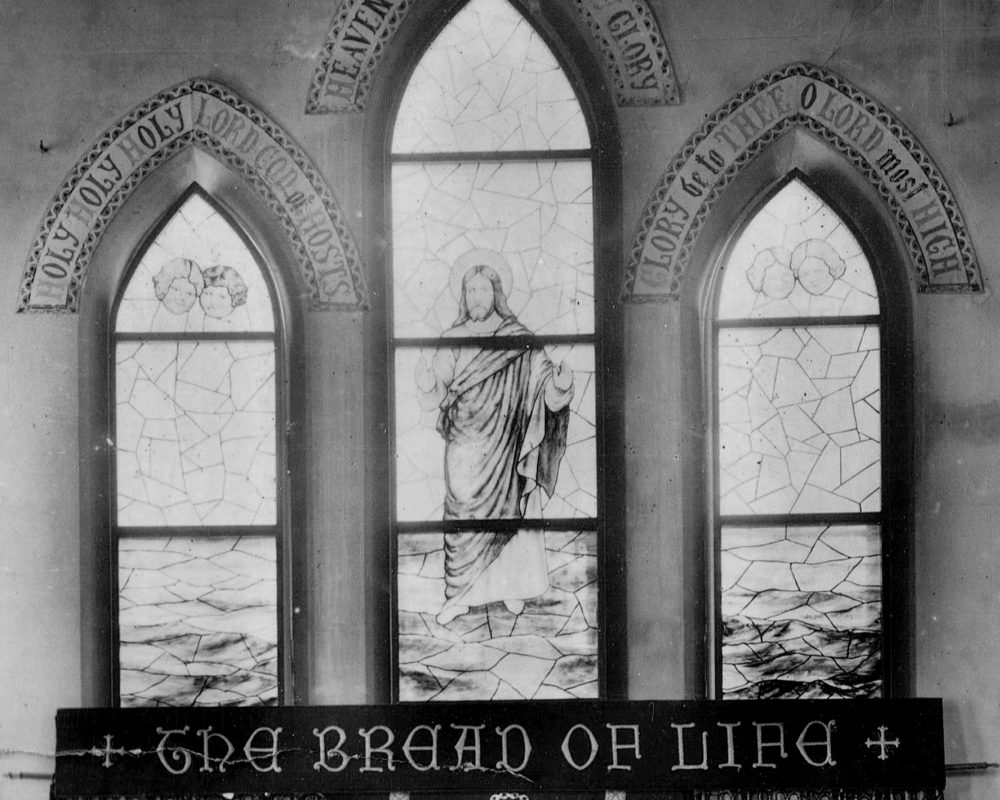 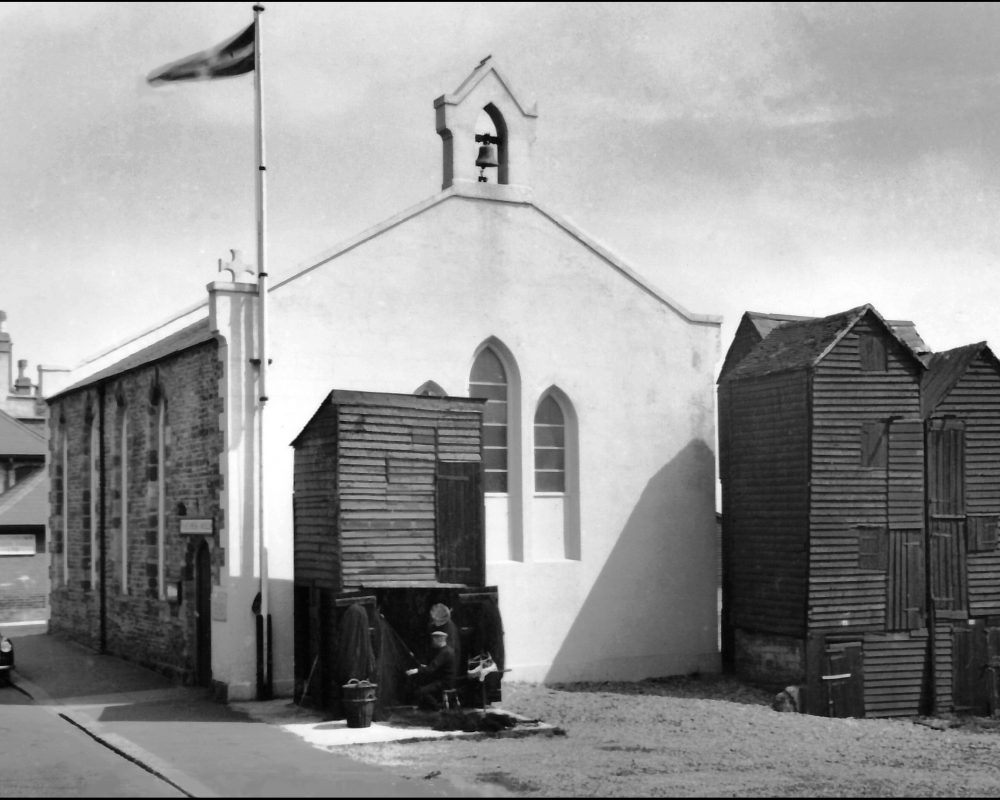 The History of the Hastings Fishermen’s Museum 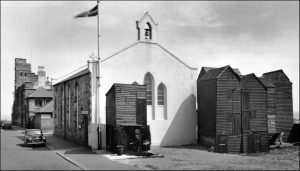 Until the early 1830s there was no ground where the Museum stands today, because the sea was coming up to the foot of the cliffs. In order to protect both the cliffs and the Old Town from increasing invasions by the sea, Hastings Council in late 1834 built a wooden groyne where the east side of the Shipwreck Museum is today. Groynes are barriers built across a beach to stop the movement of shingle along the coast, and a large amount of shingle immediately built up on the west side of the 1834 groyne, creating a new piece of ‘ground’ in front of the cliffs.

On this new land the fishermen wanted to build sheds in which to store their fishing gear, but there were so many boat-owners seeking a space that Hastings Council had to lay out the ground in rows of plots, with plots only about eight or nine feet square. Because of the small size of these plots, the sheds that the fishermen built – known as the ‘net shops’ – had to be tall and thin, making their combination of layout and design unique to Hastings. The 39 surviving net shops are now listed as grade II* (grade two star) by English Heritage.

In 1843 another groyne was built, to the east of the one of 1834, where the big groyne holding up Rock-a-Nore car park is today (that was built in the late 1880s). This 1843 groyne added to the amount of new land available to the fishing fleet and provided space for other uses, including boat-building, an ironworks – and a church.

The Fishermen’s Church was to be built in 1853/4 partly on the site of a compound set up in 1839 by HM Customs to cut up boats used by smugglers. Until then the Customs had had their ‘condemned yard’, as it was known, on what is now the seafront opposite Pelham Crescent, but this had become a fashionable tourist area, so the Customs moved to Rock-a-Nore in 1839. By around 1850 smuggling had almost died out, and in late 1852 the Crown therefore gave up using the compound and granted a lease of the land which it owned for the church.

The early 1850s were a time of economic prosperity, both nationally and in Hastings, where the arrival of the railways had opened up much bigger markets for the local fishing industry. But instead of giving thanks in a church for their better lives, the fishermen had taken to imbibing alcohol, playing games of doubtful morality and generally having more fun than they had been able to in the recent past. The local religious and cultural leaders became concerned at what appeared to be this increasing decadence, and a local teacher in 1852 said he thought the fisher lads were living in ‘a state of great mental darkness’.

In March 1853 a well-known Old Town scripture reader Tom Tanner was given the task by the Diocese of Chichester of ‘promoting the spiritual good of the fishermen’ by trying to persuade them to come to either the nearby churches of All Saints or St Clements. But he was unsuccessful, and it was quickly decided that the problem was so serious that what was needed was a ‘chapel of ease’ (a subsidiary mission church) on the beach where the fishermen actually worked. The feeling was: If they won’t come to the church, take the church to them! 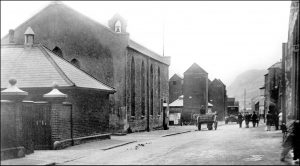 The foundation stone of the new Fishermen’s Church of St Nicolas was laid in August 1853. This was despite some initial hostility from the fishermen, who had wanted to use the ground themselves. The architect was Council surveyor William Gant. St Nicolas (also spelt as ‘Nicholas’) was the patron saint of sailors.

The Church opened for worship on 26 March 1854, with the Reverend Tanner as its first chaplain. The Rev Henry Foyster, rector of All Saints parish, was licensed by the Diocese to oversee the running of the Church. Most of the fishermen lived in his parish, the eastern half of the Old Town valley. It is believed that much of the £600 cost of building and fitting out the Church was paid for by Henry Foyster and his brother, the Rev John Foyster, rector of St Clements.

It is believed that the Church was never actually consecrated (ie, made holy), and was regarded as a mission church. The Crown granted a 75 year lease of the ground, which Hastings Council took over when it expired, and it remains the landlord of the building today. There was seating for 290 people. The popular Tom Tanner – ‘The Rev Tom’, as he was known – remained chaplain until his death in 1880, by which time he had won over the fishermen to accept the presence of the Church. Among the Church’s visiting preachers was the famous author Charles Kingsley, in 1857.

The Rev Tom’s successors as chaplain were the Rev Charles Dawes from 1880-86, the former master mariner Molesworth Edwards from 1886-1894, and the Rev Herbert Sanders from 1894-1916. Sanders was a certificated seaman, and he started the annual Blessing of the Sea, which still takes place today. He also mustered a choir 48 strong! All these clergy chaplains came under the All Saints Church rector.

In 1917 former Hastings councillor James Griffiths gave the Church a font, which is still in use today for dedications. A vestry was built on to the south side of the Church in 1923 (replaced by a big extension in 2001). A painting of ‘Christ Walking on the Sea’ on the three eastern windows was dedicated in January 1939. 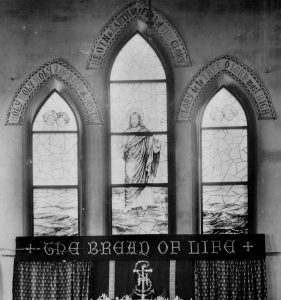 The Fishermen’s Church had to close soon after the war broke out in September 1939 because it was inside a zone of prohibited access to the public. During the war the Church was requisitioned by the military, who used it as a store. It suffered some damage, including the loss of the three newly-painted windows.

The war ended in 1945 and in early 1947 the Rev Leslie Hook, rector of All Saints from 1938-51, tried to obtain a Council lease with a long enough life to justify the high cost of repairing the building. The existing lease was to expire in June 1949, but the Council would only offer a yearly tenancy because it had development plans for the Stade that could involve the demolition of the Church. The Rev Hook decided he had no alternative but to give up using the Church, which the Council then let to Butlers Emporium hardware shop in George Street, using it as a store.

In the early 1950s Hastings Old Town was undergoing major changes, with many traditional old buildings being demolished. A large number of local residents saw this as damaging the character of the Old Town, so in late 1952 they set up the Old Hastings Preservation Society (OHPS) and started several campaigns.

In 1953 OHPS members tried to save one of the last two surviving Hastings sailing luggers, but this failed, and one of them, the Industry RX 94, was burnt on Bonfire Night 1953. This prompted special efforts to save the other lugger, the Enterprise RX 278, built in Hastings in 1912. The OHPS and fishermen proposed to the Council that the Enterprise should be housed in the new fishmarket, which was about to be built amongst the net shops. But this was refused.

So then the OHPS said that the near-derelict Fishermen’s Church should become a museum of the local fishing industry, with the Enterprise inside it. This idea received much support from the fishing community, which was feeling hostile to the town hall over many issues, not least the degradation of what they regarded as their Church. In July 1955 the remorseful Council gave the scheme the go-ahead, agreeing to pay much of the cost of restoring the building, and saying that the museum would not have to pay any rent or rates.

Butlers moved their stores out in March 1956. On 17 April part of the Church’s south wall was demolished and the Enterprise was hauled inside. The interior of the building was in such a bad state that it had to be almost gutted. But, nonetheless, it was quickly restored and many exhibits were put on display, including the last wooden horse capstan (still in the Museum today). The Fishermen’s Museum was officially inaugurated on Thursday 17 May 1956, when the mayor, Alderman Frederick Hussey, stood on the deck of the Enterprise and declared it open.

The OHPS leased the building from the Council, and set up a committee of fishermen and some OHPS representatives to actually run the Museum. The committee’s director was Admiral Hubert Dannreuther, president of the OHPS, who had been a leading figure in the setting up of the OHPS and was regarded as being the Museum’s founder. The committee also took on the role of restoring the 43 net shops that were still standing, a role the Museum played into the 1980s.

For many years from 1956 the Museum was to be open every day from 10am to 6pm from 1 April to 30 September, and occasionally in the other months. In mid-1956 a donations-collecting barrel was given by local wine merchants Ellis, Son & Vidler, and it is still in use today. Also in the summer of 1956 a small net shop was put up next to the Museum door for the use of fisherman Tom Willis, the Museum’s first ‘ship-keeper’ (in the picture on the front page). On 23 September 1956 a Harvest of the Sea Festival was held, and it became an annual event. Since 1956 special services and baptisms have taken place in the Museum many times.

A painted memorial window by Mary Dobson and a book of remembrance were unveiled by the mayor in March 1957. A year later she donated a stained glass window that was then placed above the painting (both these windows gradually deteriorated and were replaced in 2000 by Alan Wright). In August 1958 a life-size helmsman was installed on the Enterprise, with his head made by the famous sculptor Clare Sheridan, a cousin of Sir Winston Churchill. The large albatross that is a much-inspected exhibit at the Museum was donated in 1963 by Mrs Prideaux. 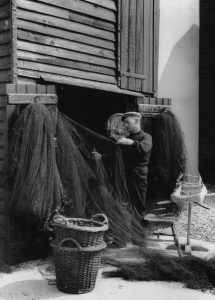 Ship-keeper Tom Willis died in late 1966 and was succeeded by fisherman Jim Martin until he died in early 1971, aged 72, followed by Tom Bailey until late 1982.

The tall flagstaff next to the Museum was erected by the OHPS in July 1968 in memory of the local ship’s chandler Fred Relph, whose daughter Helen funded it. The large early 19th century anchor next to the flagstaff was brought ashore by two local fishing boats in August 1981.

When Admiral Dannreuther died in 1977 he was succeeded as director by John Burton, a retired senior Hastings Council officer. But in 1992, when Mr Burton was 85, Council representatives said they wanted to commercialise the Museum by removing the Enterprise and installing the latest electronic gadgets. But Mr Burton and local historian Steve Peak, author of this history, together launched a successful campaign to keep the Museum as it was then, and still is today.

Following this acrimonious debate, the Council in 1993 funded a feasibility study which resulted in new options being available to boost and improve the Museum. After Mr Burton retired in late 1995 the OHPS and fishermen invested much time and effort in pursuing these options to upgrade the Museum, while keeping the existing style and atmosphere. A special visitor in June 1997 was Her Majesty the Queen. A major step forward came in 2001 when the 1923 vestry was replaced by a much bigger extension, with full facilities, including large archive and store rooms.

The Museum now owns five net shops, plus five old fishing boats which are standing outside on the beach. A sixth boat has been cut in half to create both a net shop and a cottage. 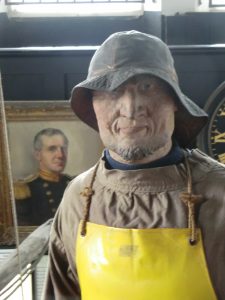 The Museum is open 364 days a year, and admission is free, although donations are most welcome, as the Museum’s income comes almost entirely from such contributions, and from sales of the many cards, toys, books and other items on display. The ship-keeper (manager) is Jan Sellers, and the Museum is run by the OHPS.

(picture: Admiral Dunnreuther keeps an eye on the helmsman.)

There are no upcoming events.